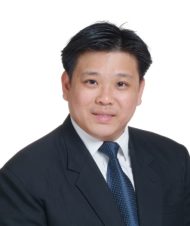 In his earlier years at EDB, Dennis was involved in the development of Singapore’s specialty chemicals sector, and spent 3 years in the U.S. facilitating inward investments from energy and chemicals, pharmaceuticals, engineering and aerospace companies to Singapore.

At JTC between the years of 2011 and 2016, Dennis was responsible for the management of specialised industrial lands such as Jurong Island, Biopolis at one-north, and the Tuas Biomedical Park. He was also involved with the development of high-rise multi-tenanted industrial buildings such as the MedTech Hub and Chemicals Hub, and industrial infrastructure such as the Jurong Rock Caverns.

Dennis received a Master of Engineering (Chemical) degree under a government scholarship from Imperial College, London. He is currently a senior member of the Institution of Engineers Singapore. Where possible, Dennis volunteers his time with grassroots organisations connecting with senior citizens, residents seeking help, and PMETs.